$357.33 Million In Sales Expected For HubSpot, Inc. (NYSE:HUBS) This Quarter

Wall Street brokerages forecast that HubSpot, Inc. (NYSE:HUBS) will report sales of $357.33 million for the current fiscal quarter, Zacks Investment Research reports. Eight analysts have made estimates for HubSpot’s earnings. The highest sales estimate is $358.00 million and the lowest is $356.90 million. HubSpot posted sales of $252.07 million during the same quarter last year, which would indicate a positive year-over-year growth rate of 41.8%. The business is expected to issue its next quarterly earnings report after the market closes on Thursday, February 10th.

HubSpot (NYSE:HUBS) last announced its quarterly earnings data on Thursday, February 10th. The software maker reported $0.58 earnings per share (EPS) for the quarter, topping the Thomson Reuters’ consensus estimate of $0.53 by $0.05. HubSpot had a negative return on equity of 7.59% and a negative net margin of 6.50%. The business had revenue of $369.31 million during the quarter, compared to analyst estimates of $357.52 million. During the same period last year, the company earned ($0.19) earnings per share. HubSpot’s quarterly revenue was up 46.5% compared to the same quarter last year.

Fortune 500 Companies, Semiconductor producers, and even some of the largest sportswear manufacturers are all betting big by investing in a market Bloomberg Intelligence says could be worth $800 Billion by 2024.

Get the free report with the 4 most promising stocks to capitalize on the groundbreaking Metaverse.

HubSpot, Inc develops Internet marketing software solutions. The firm operates through the following geographical segments: Americas, Europe and Asia Pacific. The company was founded by Brian Patrick Halligan and Dharmesh Shah on April 4, 2005 and is headquartered in Cambridge, MA. 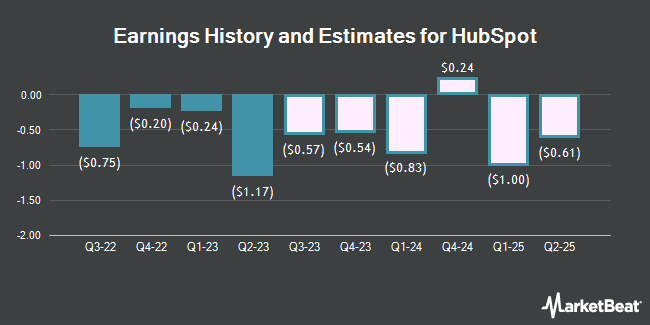 This instant news alert was generated by narrative science technology and financial data from MarketBeat in order to provide readers with the fastest and most accurate reporting. This story was reviewed by MarketBeat’s editorial team prior to publication. Please send any questions or comments about this story to [email protected]

Before you consider HubSpot, you’ll want to hear this.

MarketBeat keeps track of Wall Street’s top-rated and best performing research analysts and the stocks they recommend to their clients on a daily basis. MarketBeat has identified the five stocks that top analysts are quietly whispering to their clients to buy now before the broader market catches on… and HubSpot wasn’t on the list.

While HubSpot currently has a “Buy” rating among analysts, top-rated analysts believe these five stocks are better buys.