A Spiral Galaxy That Doesn’t Play By The Rules

Title: Detection of a Superluminous Spiral Galaxy in the Heart of a Massive Galaxy Cluster

Status: Submitted to the Astrophysical Journal, available on arXiv

Galaxy clusters contain hundreds of galaxies in a huge variety of shapes and sizes, ranging from irregular dwarf galaxies to giant ellipticals. The most luminous member of a cluster is known as the Brightest Cluster Galaxy, or BCG. Each BCG is different, but there are some properties that they tend to have in common – most BCGs are found at the very centre of their host cluster, and are large, elliptical galaxies, containing little gas and forming very few new stars.

The reason why most BCGs look so similar is well-understood, as it is thought that these large galaxies form via a series of galaxy mergers. These are violent cosmic events that slowly increase the size of the galaxy, whilst also destroying any delicate disk or spiral arms that the galaxy may have (click here to see a simulation of two merging spiral galaxies). Additionally, mergers can lead to gas being expelled from a galaxy, resulting in the gas-poor, quenched BCGs that we see today.

However, today’s paper presents an exciting twist to this story, by presenting data from three galaxy clusters that do not appear to follow this trend, including one BCG that doesn’t fit with our current theories at all.

To answer this, we can look at the amount of X-ray radiation surrounding these galaxies. X-rays are emitted by the intracluster medium (ICM), a vast cloud of incredibly hot gas that fills a cluster, occupying the space between galaxies: if a cluster was a tasty chocolate chip muffin, the ICM would be the cake, filled with chocolate chip galaxies. Using the X-ray telescope XMM-Newton, the authors found no X-ray emission surrounding two of their galaxies. However, as Figure 1 shows, the remaining five have large amounts of X-rays being produced nearby. This indicates the presence of the ICM, meaning that these galaxies are nearby to a galaxy cluster. 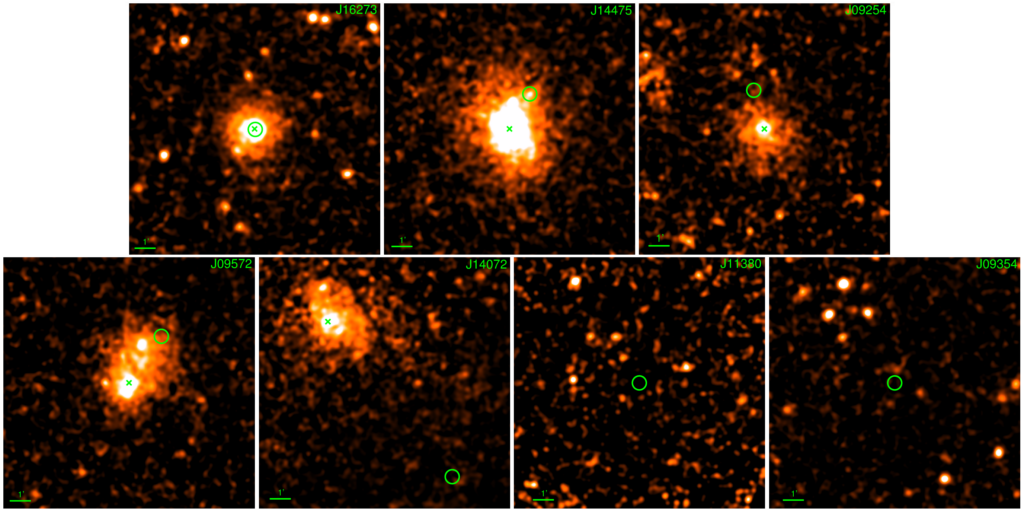 Figure 1: X-ray observations of the region surrounding each of the seven superluminous disk galaxies. Regions of stronger X-ray emission are represented by lighter colour, and the centre of each X-ray region (i.e. the cluster centre) is marked by a green cross. The position of each superluminous disk galaxy is shown by the green circle. Note that the two galaxies in the bottom-right (J11380 and J09354) have no associated clusters, and that the top-left galaxy (J16273) is located at the centre of its cluster. Adapted from Fig. 1 in today’s paper.

It’s unusual to find spiral galaxies inside of clusters, but not unheard of. However, what makes this work so exciting is that in three of these clusters, there is not a single other galaxy that is brighter than the superluminous spiral – in other words, they are the Brightest Cluster Galaxy. Finally, one of these galaxies (J16273 in Figure 1) is not only the BCG, but is found directly in the cluster centre, in exactly the position that we would usually expect to find a BCG!

Galaxy mergers, but not as you know them

The fact that J16273 is the brightest galaxy in a cluster, and lives right in the cluster centre, makes it appear to be a fairly typical BCG. However, BCGs are elliptical galaxies, because of the large numbers of galaxy mergers that they experience. How can we explain why this one is so different from all of those that we’ve seen before?

Surprisingly, one explanation is mergers themselves. The authors suggest that J16273 was previously a regular, elliptical BCG, that recently merged with a smaller gas-rich galaxy. Under the right conditions, this merger could spin up the elliptical galaxy, with the remnants of the gas-rich galaxy forming a brand new spinning disk.

In order to really understand these giant spiral galaxies, future work will need to look at many more than just seven of them. The authors acknowledge this, and suggest that eROSITA, an ongoing X-ray survey of the sky, will be able to look at many more of these galaxies and determine whether they live in clusters, groups, or alone. eROSITA is due to release its first data at the end of 2022, and should help us to solve the mystery of how these huge spirals ended up in places we never expected to find them.