by Duong
in Cambridge

Grenville Davey, the Turner Prize-winning sculptor, has died at age 62. He was born in Launceston, Cornwall, in 1961. He studied at Exeter College of Art and Design until 1982 and graduated from Goldsmiths College in 1985. He won the Turner Prize in 1992 for the continuing development of his sculpture, as seen in shows held at Kunsthalle, Bern and Kunstverein, Dusseldorf. Davey was considered the outsider when he won the £20,000 Turner Prize back in 1992, beating Alison Wilding, Damien Hirst, and David Tremlett.

Davey’s sculptures asserted non-site-specific, self-contained objects. His work referred ambiguously to objects from everyday life. However, the fact that the artist made them suggests that the works kept their distance from the kind of neo-Dadaism, or neo-Popism, which was prevalent in the work of other young British artists. 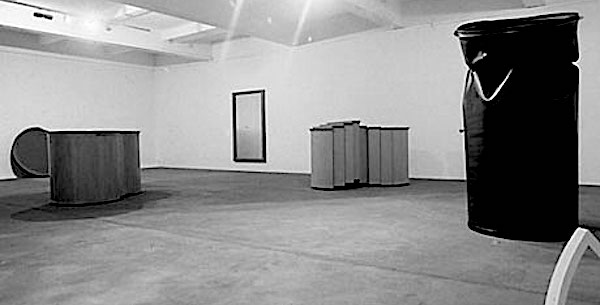 Davey’s work was influenced by sculptors such as Tony Cragg and Richard Deacon and showed a similar interest in industrial materials. The simplicity of his forms shows an affinity with minimalism. Many of his works make references to everyday objects that would be readymades if exhibited in themselves. A metre and a half wide clothes button made in steel is a typical early work. Later works, such as Gold (Table) (a table as tall as a human) are more significant. Primarily a sculptor, Davey produced a series of 12 prints with five other artists, including etchings and screenprints.

London School of Hygiene & Tropical Medicine commissioned Davey to create a piece that reflected the maritime origins of the School; this resulted in a vast oak veneer wave wall. This is part of the School’s contemporary art programme, which started in 2000. The initial idea was to commission or purchase some sculptures and pictures, but the building has few suitable spaces for placing or hanging art. So instead, the emphasis shifted towards commissioning works that fitted, both in terms of the School’s themes and the building’s architecture.

I am deeply saddened to announce the loss of one of the world’s great souls and most accomplished artists. Our very own Grenville Davey. He leaves his beloved son Sennen Davey, ex-wife, lifelong friend and mother of his son, Victoria Burton, and Kathy Hartley, his love and inspiration. He was like family to us, his friendship with Magnus Hammick was one of unfailing devotion, long we will grieve him, we all loved him so very much. He lived free and happy in his isolation, spirited in his love of nature, his home and garden was his sanctuary.

His last message was to Kathy Hartley on his return from Cornwall where he’d been with Sennen on the coast, saw us in Somerset, where this photo is taken, before he died peacefully in his Essex home.

​“It’s so lovely to be home, my own bed, gentle rain, garden, future, will sleep well ok, and dream, I can still hear the sea.”

Davey’s work had a simplicity of form and an affinity with minimalism. He was an intelligent, philosophical thinker, generous in spirit.

Davey was also a highly regarded teacher who taught at the University of the Arts London and programme leader of the MA Fine Art at the University of East London. He loved his work and teaching others. He was affiliated with the physics department of Queen Mary, University of London, and the Isaac Newton Institute for Mathematical Sciences. In 2007 Davey took part in ‘Turner Prize: A Retrospective, 1984-2006’ at Tate Britain, alongside his contemporaries, and exhibited widely in group and solo shows at Mori Art Museum, Tokyo, Tate Modern, London, Kunsthallen Brandts Klaedefabrik, Odense, Denmark, Primo Piano, Rome, Lisson Gallery, London, Hayward Gallery, London, Württembergischer Kunstverein, Stuttgart, most recently at Close Ltd, Somerset, in 2019.

​He worked on many commissions during his career including the Olympic Park and the School of Hygiene and Tropical Medicine in London, Yorkshire Sculpture Park, Arts Council England and Linear Park, Cambridge, and more. His timeless sculptures are held in numerous private collections around the world.

Let our hopes for peace and love prevail.