Ukrainian veterinarian Vladyslav Matviichuk continues to provide animals with life-saving care in Kyiv despite fleeing his own home and veterinary practice after Russian President Vladimir Putin launched an unprovoked attack on Ukraine in late February. The ongoing attack is forcing millions of Ukrainians to flee their homes to neighboring countries or to take shelter inside protected areas such as underground metro stations.

The attack is not only leaving many people and animals injured and frightened, but the ongoing conflict is creating blockades to provide care to those in need. To help, Matviichuk has set up a makeshift animal hospital in his parents’ kitchen in Kyiv where he and his wife Iryna—who fled their home with their two rescued cats—provide animals with free medical care. 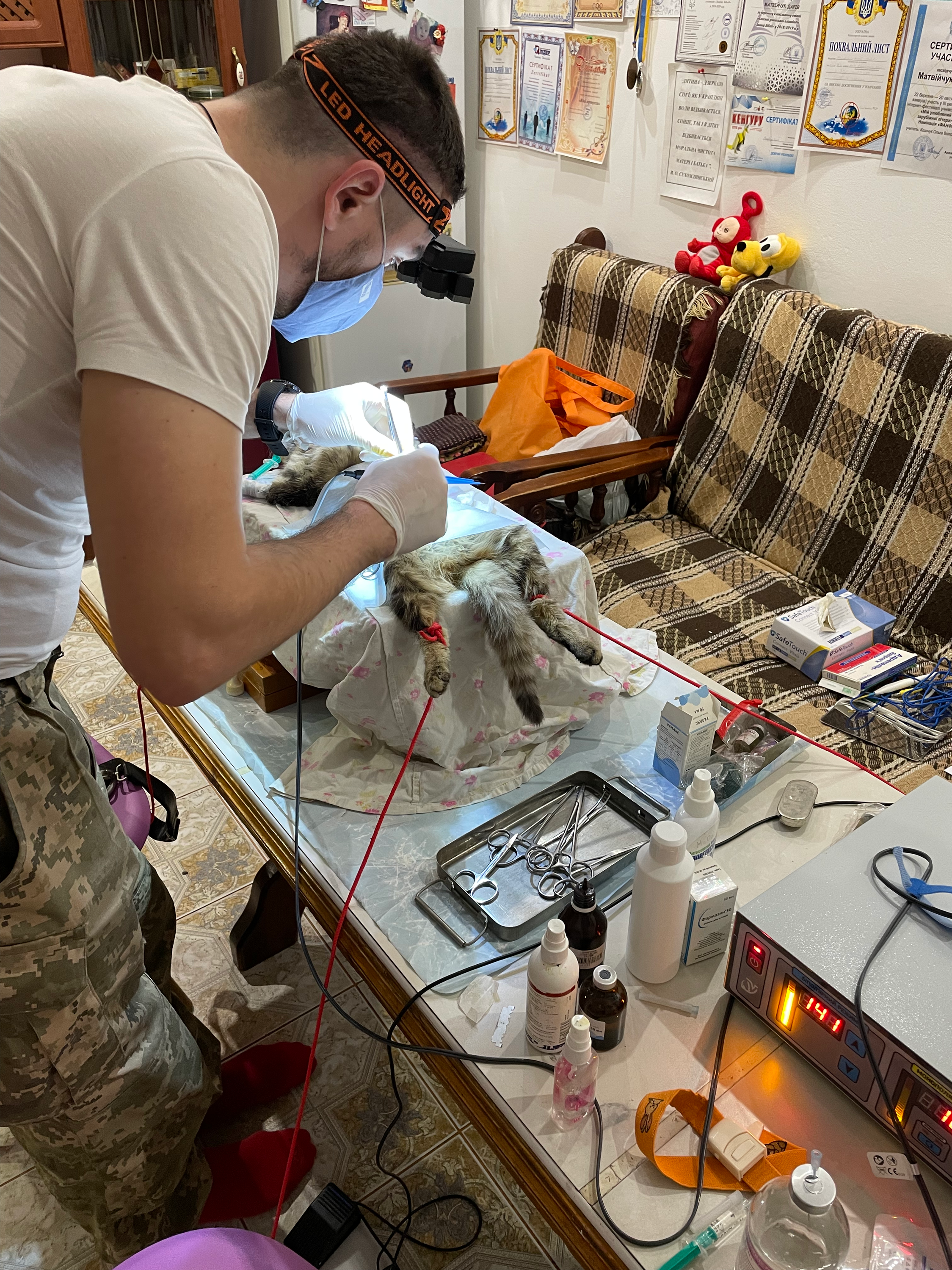 “Many animals suffer from explosions, missiles, and tanks. Many animals became homeless. Veterinary clinics are destroyed or closed. It is a very big problem to buy food and medicine for animals today,” Matviichuk said in a statement. “I try to help everyone. I treat and operate at home, take calls, consult online, by phone, by video, if it is not possible to help animals offline. Unfortunately, my resources are currently running out.” Due to this shortage of supplies, the couple has been using cut-up bed sheets as postoperative bandages for animals.

Animal-rights group In Defense of Animals (IDA) provided Matviichuk with $5,000 to continue the life-saving operation in the short term. “Brave Ukrainian people who are suffering tremendously right now are showing the world how important animals are to them, and that they are also a huge and important part of this humanitarian crisis,” IDA Communications Director Fleur Dawes said in a statement. “We’re grateful to our supporters whose generosity is enabling us to offer aid at such an important time and hope Dr. Matviichuk’s story inspires more people to continue to give.”

The heroic veterinarian hopes to create a network of colleagues to join his effort in helping animals in need. IDA has organized a fund-raising effort for Matviichuk and those interested in donating can do so here.

Animal shelters under attack in Ukraine

Many parts of Ukraine are experiencing major issues in caring for animals affected by war. As of March 10, more than 5,000 animals were stranded across the country in Kyiv Oblast, Mykolaiv, Kharkiv, Mariupol, and other war zones. Since the onset of the attack, thousands of volunteer-led shelters have been cut off from supplies. Many volunteers have risked (and lost) their lives to deliver food to shelters and evacuate animals to safety.

Ukrainian animal-rights organization UAnimals is working on the ground to rescue animals and bring relief to volunteers. “The situation with animals and shelters is just awful,” Oleksandr Todorchuk, founder of UAnimals, said in a statement. “We know about the shelling of at least four shelters in Ukraine, which were intentionally or accidentally hit by a bombshell. Many animals died. In Mykolaiv as a result of the shelling by Russian occupiers, 100 cats in the shelter were lost. Two employees of the Feldman Ecopark (a zoo in Kharkiv) were shot by the Russians when they came just to feed the animals.” 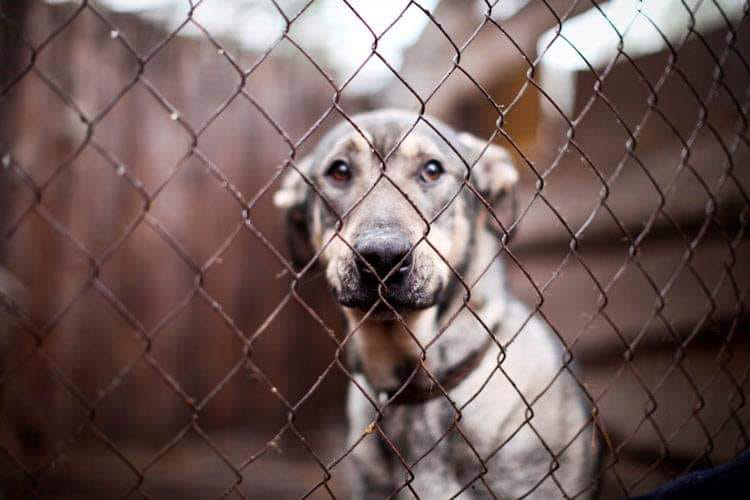 Near Kyiv, more than 3,000 animals and people are trapped in Sirius, Ukraine’s largest shelter, according to shelter coordinator Iryna Lozova. “Since February 24, ‘Sirius’ has been under blockade. There is no access to the shelter: all the routes are blocked by the Russian occupiers,” she said in a social media post. “They do not allow the transportation of food or medicine for people and animals of the Dymer community. People and animals are on the verge of a humanitarian catastrophe. There is no electricity in the community and animal shelter, no water, no cellular connection, and no Internet, there is constant shelling.” Lozova is sharing updates on social media daily and more information about how to help Sirius can be found here.

Other shelters undergoing similar struggles include Hostomel (one of the oldest shelters in Ukraine where over 700 animals and people remain stranded since the start of the war); Best Friends in Makarivs’kyi district of Kyiv Oblast (where shelling led to a fire that killed more than one hundred of the shelter’s animals); and many others.

In addition to support through donations, these organizations are calling upon NGOs and governments to pressure Russian forces to establish “green corridors,” or safe passage routes in and out of Ukraine to help people and animals who are trapped without supplies. 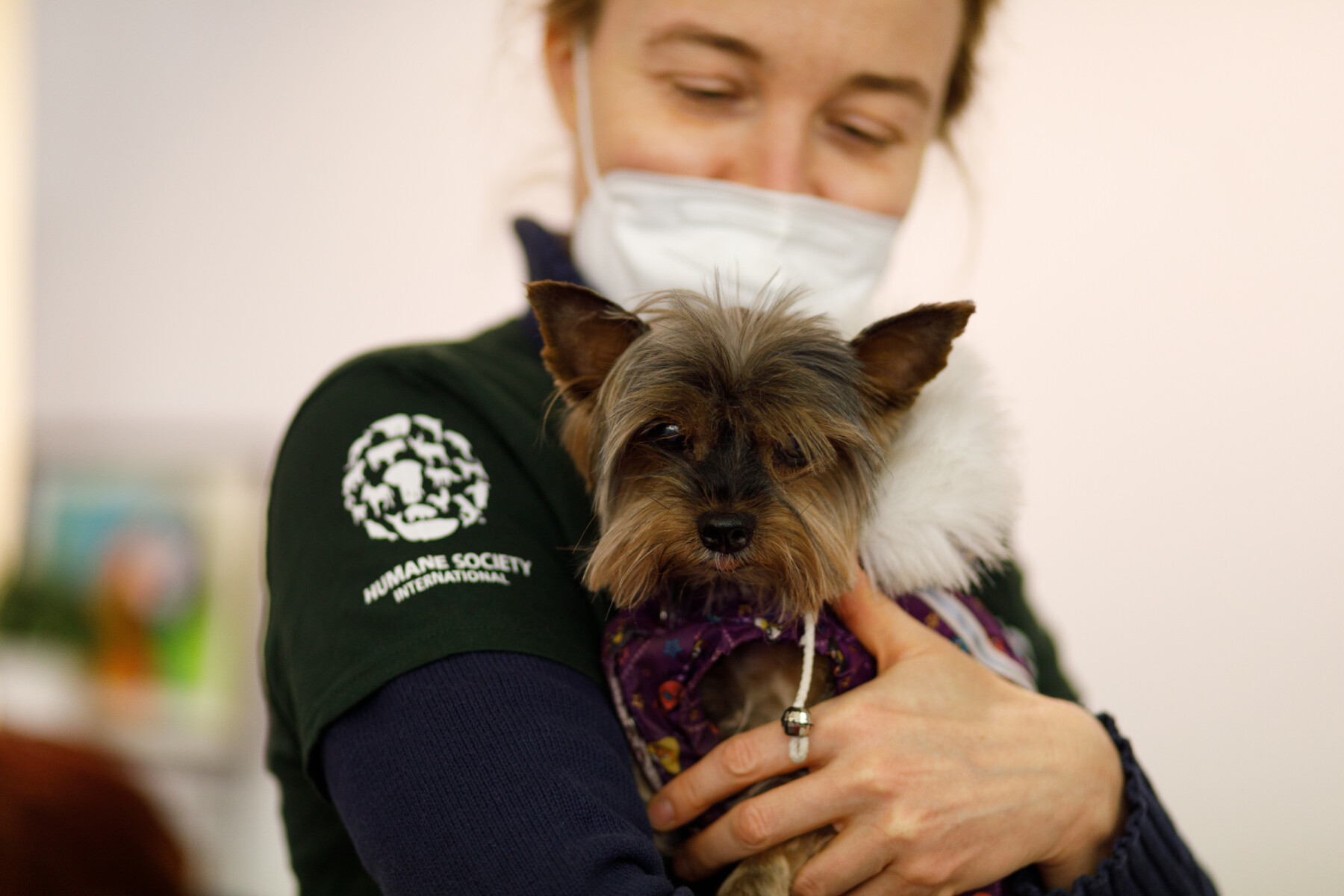 Some help to Ukraine is underway

Currently, the Romanian Red Cross—which has, for the first time, added life-saving aid for animals to its humanitarian aid transport—is working in partnership with Humane Society International (HSI) to aid in the crisis. HSI has already donated its first metric ton of pet food to the Romanian Red Cross, which it is distributing across Ukraine. Supported by a donation from candy company Mars, Incorporated, HSI is also working with various animal welfare organizations in neighboring countries to secure veterinary care for refugees fleeing Ukraine with companion animals in tow. Donations to support this effort can be made here.

“As this conflict continues, people and animals in Ukraine are suffering alongside each other, particularly in those animal shelters and homes where leaving animals behind has simply been an impossible decision to make,” Andreea Roseti, HSI Europe’s Romania director, said in a statement. “The tragedy of war doesn’t differentiate between two legs or four, and together with the Red Cross we will get aid to those people in Ukraine desperately asking for help to keep their animal friends alive in this crisis.”

For more about Ukraine, read:
Entrepreneur Develops Ukraine’s Version of Vegan Beyond Burger
Ukraine’s Only Foie Gras Producer Shuts Down Over Cruelty Concerns
How This Vegan Chicken Kyiv Is Helping Ukrainians in Crisis

Anna Starostinetskaya is the Senior News Editor at VegNews and is always keeping an eye on all things vegan in her home city of San Francisco, CA and everywhere else.

Get our Best of Vegan Issue FREE when you subscribe to VegNews.