An MBTA commuter rail train struck an unoccupied vehicle that was stuck on the tracks Sunday night in Ashland, Massachusetts, officials said.

Fortunately there were no injuries, the Ashland Fire Department and Transit Police Department said.

Ashland firefighters say the driver got stuck on the tracks at the Main Street crossing, and ditched it just in time.

Video from the scene showed a mangled car, which was a dramatic scene to take in for people like Ribbons Simonelli, who didn’t immediately realize there was no one inside the car when it was hit.

“I peered over and saw just totaled car,” said Simonelli, who works at the Stones Public House right near the scene. “I first thought someone was in it, so I was heartbroken at the thought of someone being in that car.”

A spokesperson for Keolis — the company that operates the commuter rail — told NBC10 Boston in an email that Worcester Train 2513 (the 5 p.m. from South Station) struck an empty vehicle that had been abandoned by its driver on the tracks near the Main Street crossing in Ashland.

The spokesperson said there were no injuries to the 73 passengers or crew, and “all warning systems were functioning as intended.”

The Worcester Line train remained stopped at Ashland for more than two hours, and the MBTA reported multiple delays following the incident. Eventually the passengers were let off in Ashland at the train station, and then transferred to another train.

Normal service has since resumed on the Worcester Line, but passengers were warned they may experience residual delays, the MBTA said. 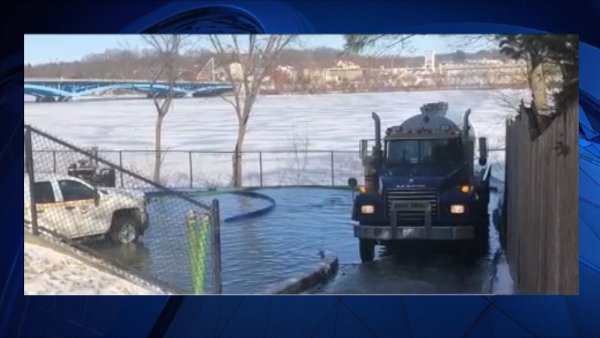 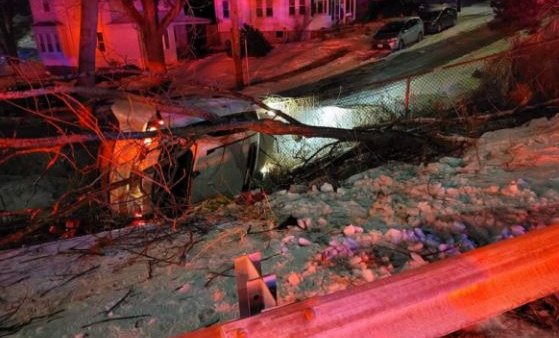 It was not immediately why or how the car got stuck on the tracks. Richard Sullivan, superintendent of the Transit Police Department, said the agency does not believe the car was stolen.

Ironically, two years ago to the night, another commuter rail train crashed into a car in the same place. That time it was a grandfather and grandson who made it out just minutes before getting hit.

Simonelli says she is thankful both two years ago and this Sunday that no one was hurt.

“When you come through here it’s kind of hard to tell the difference especially at night where the road is and the tracks are so my thought he turned onto the tracks and by the time he realized it was too late he just hopped out and took off,” she said.

The crossing was closed while the train was inspected and the car was removed from the scene. There was also a small fuel spill from the car following the collision, the fire department said.

The crash is under investigation. It also comes less than a month after an MBTA commuter rail train struck a car in Wilmington, killing the 68-year-old woman inside.

MBTA General Manager Steve Poftak released a statement just days after that crash saying they had learned enough to report that human error was the “primary focus” of their investigation into Roberta Sausville’s death, with a preliminary investigation revealing that a signal maintainer for Keolis did not return the safety system to its normal operating mode following preventative maintenance.