No Result
View All Result
Home US

by Duong
in US 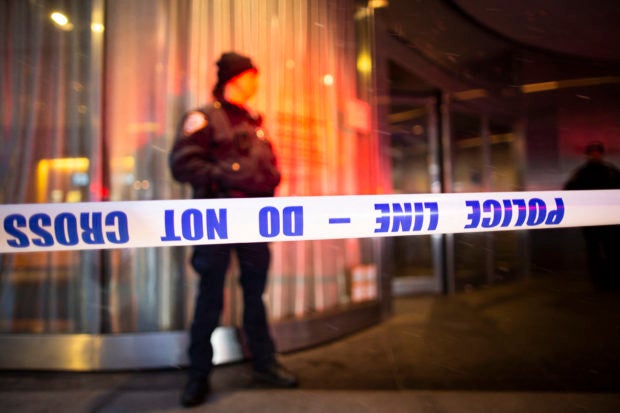 A New York City police officer stands behind a police line at the entrance of the Museum of Modern Art in New York City. AFP

NEW YORK — Police in New York have appealed to the public to help identify a man who shot at least two homeless people Saturday, killing one of them as he slept on the street.

“The cases are clear and horrific,” said Mayor Eric Adams, a former police officer, as he urged any witnesses to come forward.

A shooter first fired on a 38-year-old man in Lower Manhattan early Saturday, wounding but not killing him, investigators said.

Then, shortly before 5:00 pm (2200 GMT), police in the same neighborhood found the lifeless body of another man in a sleeping bag. He had been shot in the head and neck.

Video surveillance footage captured that attack, showing the shooter firing at the second man as he slept around 6:00 am, shortly after the first incident.

Sunday night, local media reported a third man appeared to have been attacked.

That man, who also seemed to be homeless, was found dead in the city around 7 pm local time (2300 GMT) with a “possible gunshot wound,” NBC New York reported, citing police.

He and the police urged New York’s thousands of homeless people to contact city agencies that can help them find sleeping accommodation.

New York’s homeless population has grown in recent years, and Adams announced a plan just weeks after taking office in January to move them out of the city’s vast system of subway tunnels, where many sleep on frigid nights.

His proposal drew sharp criticism from some non-governmental organizations.

“People only stay in the subway,” said the Coalition for the Homeless, “because they have no better place to go.”

New York grapples with the influx of homeless in midtown Manhattan

Don’t miss out on the latest news and information.

(CNN)Two people have died in the McBride Fire raging in New Mexico that has scorched more than 5,000 acres in the Sierra Blanco mountain range, police said.They were found Wednesday in a burned home in Ruidoso, New Mexico, state police said in a news release. Soon after, local police were...

New York Daily News | Apr 13, 2022 at 4:10 AM Lt. Gov. Brian Benjamin leaving court at 500 Pearl Street after being arrested and indicted in the connection of campaign finance scheme on charges including bribery and falsification of records, Manhattan, New York, Tuesday April 12, 2022. (Shawn Inglima/for...

EXPLAINER: What Do New Alabama Laws Say On Transgender Kids?

MONTGOMERY, Ala. — Alabama has become the first state to criminalize the use of puberty blockers and hormones to treat transgender people under age 19. In line with some other Republican-led states, legislators here also passed a law requiring students to use bathrooms corresponding to their sex at birth and...

(Getty Images)President Joe Biden is expected to announce new gun regulations on Monday to rein in so-called “ghost guns” — privately made firearms without serial numbers that have been used in several high-profile violent crimes.Mr Biden is expected to nominate Steve Dettlebach, an Obama-era US attorney, to run the Bureau...