Sarepta Therapeutics (NASDAQ:SRPT) is scheduled to be issuing its quarterly earnings data after the market closes on Tuesday, March 1st. Analysts expect the company to announce earnings of ($1.21) per share for the quarter.

Right now helium is one of world’s best investments. It’s Earth’s most nonrenewable resource and it’s fast running out. That’s a crisis because helium is critical in medical diagnostics, military weapons, and semiconductors, which are the chips that run all the 21st century’s gadgets, appliances, and vehicles.

Sarepta Therapeutics, Inc is a commercial-stage biopharmaceutical company, which is engaged in the discovery and development of therapeutics for the treatment of rare diseases. The company was founded on July 22, 1980 and is headquartered in Cambridge, MA. 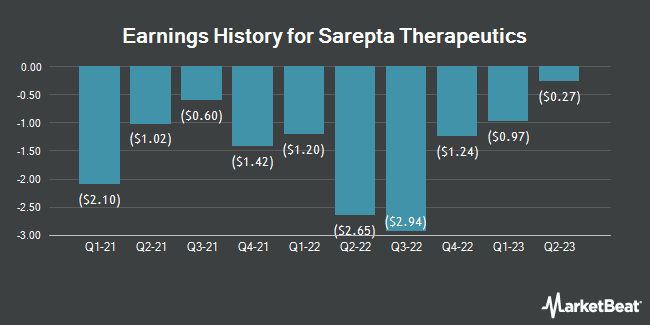 This instant news alert was generated by narrative science technology and financial data from MarketBeat in order to provide readers with the fastest and most accurate reporting. This story was reviewed by MarketBeat’s editorial team prior to publication. Please send any questions or comments about this story to [email protected]

Should you invest $1,000 in Sarepta Therapeutics right now?

Before you consider Sarepta Therapeutics, you’ll want to hear this.

MarketBeat keeps track of Wall Street’s top-rated and best performing research analysts and the stocks they recommend to their clients on a daily basis. MarketBeat has identified the five stocks that top analysts are quietly whispering to their clients to buy now before the broader market catches on… and Sarepta Therapeutics wasn’t on the list.

While Sarepta Therapeutics currently has a “Buy” rating among analysts, top-rated analysts believe these five stocks are better buys.